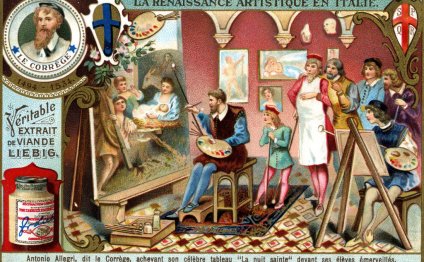 Fifteenth-century Italy was unlike any other place in Europe. It was divided into independent city-states, each with a different form of government. Florence, where the Italian Renaissance began, was an independent republic. It was also a banking and commercial capital and, after London and Constantinople, the third-largest city in Europe. Wealthy Florentines flaunted their money and power by becoming patrons, or supporters, of artists and intellectuals. In this way, the city became the cultural center of Europe, and of the Renaissance.

When Galileo died in 1642, he was still under house arrest. The Catholic Church did not pardon him until 1992.

The New Humanism: Cornerstone of the Renaissance

Thanks to the patronage of these wealthy elites, Renaissance-era writers and thinkers were able to spend their days doing just that. Instead of devoting themselves to ordinary jobs or to the asceticism of the monastery, they could enjoy worldly pleasures. They traveled around Italy, studying ancient ruins and rediscovering Greek and Roman texts.

To Renaissance scholars and philosophers, these classical sources held great wisdom. Their secularism, their appreciation of physical beauty and especially their emphasis on man’s own achievements and expression formed the governing intellectual principle of the Italian Renaissance. This philosophy is known as “humanism.”

Humanism encouraged people to be curious and to question received wisdom (particularly that of the medieval Church). It also encouraged people to use experimentation and observation to solve earthly problems. As a result, many Renaissance intellectuals focused on trying to define and understand the laws of nature and the physical world. For example, Renaissance artist Leonardo Da Vinci created detailed scientific “studies” of objects ranging from flying machines to submarines. He also created pioneering studies of human anatomy. Likewise, the scientist and mathematician Galileo Galilei investigated one natural law after another. By dropping different-sized cannonballs from the top of a building, for instance, he proved that all objects fall at the same rate of acceleration. He also built a powerful telescope and used it to show that the Earth and other planets revolved around the sun and not, as religious authorities argued, the other way around. (For this, Galileo was arrested for heresy and threatened with torture and death, but he refused to recant: “I do not believe that the same God who has endowed us with senses, reason and intellect has intended us to forgo their use, ” he said.)

However, perhaps the most important technological development of the Renaissance happened not in Italy but in Germany, where Johannes Gutenberg invented the mechanical movable-type printing press in the middle of the 15th century. For the first time, it was possible to make books–and, by extension, knowledge–widely available.

During the Italian Renaissance, art was everywhere. Patrons such as Florence’s Medici family sponsored projects large and small, and successful artists became celebrities in their own right.

Renaissance artists and architects applied many humanist principles to their work. For example, the architect Filippo Brunelleschi applied the elements of classical Roman architecture–shapes, columns and especially proportion–to his own buildings. The magnificent eight-sided dome he built at the Santa Maria del Fiore cathedral in Florence was an engineering triumph–it was 144 feet across, weighed 37, 000 tons and had no buttresses to hold it up–as well as an aesthetic one.

Brunelleschi also devised a way to draw and paint using linear perspective. That is, he figured out how to paint from the perspective of the person looking at the painting, so that space would appear to recede into the frame. After the architect Leon Battista Alberti explained the principles behind linear perspective in his treatise Della Pittura (On Painting), it became one of the most noteworthy elements of almost all Renaissance painting. Later, many painters began to use a technique called chiaroscuro to create an illusion of three-dimensional space on a flat canvas.

The End of the Italian Renaissance

By the end of the 15th century, Italy was being torn apart by one war after another. The kings of England, France and Spain, along with the Pope and the Holy Roman Emperor, battled for control of the wealthy peninsula. At the same time, the Catholic Church, which was itself wracked with scandal and corruption, had begun a violent crackdown on dissenters. In 1545, the Council of Trent officially established the Roman Inquisition. In this climate, humanism was akin to heresy. The Italian Renaissance was over.

Art and Love in Renaissance Italy - Imagery of Love and ...

Art and Love in Renaissance Italy - Sex in the Eternal ...

In keeping with the spirit of humanism, artists of the early Renaissance strove to portray lifelike human forms with correct…