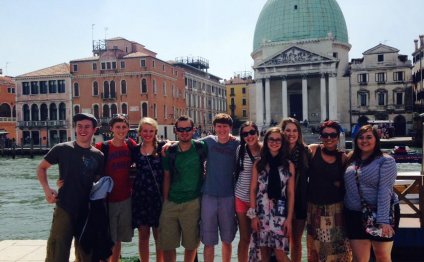 In Roman art, politics and art were often closely linked. Unlike the Greek art, secular values stood in the foreground of Roman art. Decorations, interiors and frescoes were more important than outside facades. However, in addition to this direction, the Roman art in Italy brought three major innovations: the art of portraits, landscape painting and the depiction of history; three art-historical achievements that were used consequently by the emperors to show off the fame and glory of their reign. Finally, the rise and acceptance of Christianity brought significant change with it, as art was put into the service of the church, which would have a decisive impact on art in Italy and Europe in the coming centuries.

"The Feast in the House of Levi" by Veronese

After the fall of the Roman Empire, the Roman art tradition continued to exist even beyond the Byzantine Empire. Italian city states developed into separate cultural and political centres understanding perfectly how to combine the glorious past with the present. The Romanesque and Gothic art were followed by more nature-inspired illustrations until the rediscovery of the ancient world, as the Renaissance period emerged in Italy. Starting in Florence, a new style of art dominated Italy. It received strong support from the church and from rich cities. Leonardo da Vinci (1452-1520), Michelangelo (1475-1564), Raphael (1483-1520) and Titian (14) marked the heyday of the Italian Renaissance and left many wonderful works that make the hearts of all aficionados of Italian art beat faster. Two artists with works as important as fascinating marked the transition to Baroque: Annibale Carracci (1560-1609) and Michelangelo Merisi da Caravaggio (1573-1610), whose works can be seen in Naples and Rome.

In order to strengthen the faith and fight the spreading of Protestantism, the church used art for a special purpose. The Baroque period can therefore be regarded as an instrument of propaganda that was meant to illustrate the importance of the Catholic Church. When speaking of Baroque in Italy, Rome and the legacy of two great artists come to mind: Gianlorenzo Bernini (1598-1680) and Francesco Borromini (1599-1667). Rome owes its present appearance to these two masters. Without the architectural achievements of Borromini and Bernini's magnificent sculptures, Rome would probably be way less charming.

Italian sculptors, painters, architects and artists had been dominating the art scene in Europe for 400 years continuously initiating new eras with their achievements. However, with the rise of nationalism and the unification of Italy, this primacy ended abruptly. At the end of the 19th leading into the 20th century, Italian artists once more caused a stir with futurism and the Pittura metafisica, the metaphysical art. However, the time of the great Italian artists who put all their skills under the service of the church was finally over. Their legacy still makes the art in Italy a central factor for tourists on their journeys through the country.

Arts in Prato - Italy on Film

SACI: Introduction to Women & the Arts in Italy

If you’re looking to experiment with new mediums, try out new techniques, and grow as an artist, taking art classes abroad…

In keeping with the spirit of humanism, artists of the early Renaissance strove to portray lifelike human forms with correct…