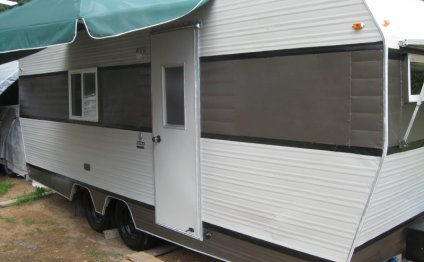 The Nugget: How To Paint the Exterior of a Trailer

I am a huge believer in finding inspiration all around you, and you never know when it is going to strike. Looking at pictures of vintage trailers online I realized that the ones that I loved the most had a mix of bright colors and aluminum. Of course I wanted to do a bold pattern (because its me) but I was having a hard time finding something that was busy, but not too busy. This is where the “finding inspo all alround you” comes in to play. One of my favorite #colddeadfingers diehards Katie linked up this picture of some thrift store scores.

Do you see the amazing Thermos pattern? The one with the diamonds?! It was exactly what I was looking for! (Thanks Katie!!)

We did a few color mock ups in Photoshop and everything was just feeling so light. I swear that has been the biggest reoccuring problem that I have had with this project. So at the last minute I decided to go less desert than my original plan so that I could use some color to ground the dang thing.

I debated paint choice back and forth the entire time that we were renovating the interior. I wanted to do something that was attainable for the budget DIYer. Taking the trailer to an automotive paint shop was not even an option because $$$…$$$$$$. And also $$$.

Here is what I came up with. Exterior Paint with the right primer TOTALLY would work and be so budget friendly it isnt even funny. But I wanted the finish to be super high gloss. So my next thought was to use Exterior Paint like Behr Marquee and put a high gloss protective coat on it. Then I thought that maybe using spray paint would be the answer (Rustoleum makes a high gloss automotive in Black and White) but I would need about 5000 cans of it and it doesnt have all of the colors that I wanted. So do you know what I did? I asked my friend Josh who is a professional painter and knows all about all of the things.

He told me that he had painted a few trailers with Exterior paint and that it did work, but needed to be touched up –> redone in about 5 years. Suck. He then said that Automotive paint would be the best, most durable option, and that it would give me the finish that I wanted. Suck again. THEN he told me that he had a HVLP sprayer for automotive paint that he would let me borrow if I wanted to DIY it. Sweet!

To prep, we stripped off all of the paint (most came off with Citristrip but some stubborn spots needed Airplane Stripper which is the heavy dutiest of heavy duty. Court did all of that scrubbing because he is the husband of the year. Then we cleaned it REALLY well, and I taped everything off so that Josh could come.

He told me that Automotive paint has the worst kind of over spray that that I needed to mask off everything that I didnt want paint on. He wasnt joking. I thought I was done taping off in the pic below, but I ended up taping off the entire top section too and I am so glad that I did.

All of the automotive supplies we bought at a specialty paint store.

First we sprayed the clean metal with automotive primer (gray)

Then once that was dry, Josh sprayed it with automotive paint. It took a few coats, but it looked AMAZING.

(It was at this point we put the door and windows on because it was SO much easier to tape them off than to tape off gaping holes.)

We started by putting down the white first, then we built the other colors on top of it.

The next step was taping off all of the triangles that we wanted to stay white. I figured out the measurement distance and marked and taped and cut and marked and taped and cut. The most frustrating part about the entire thing was that I couldnt figure out a way to prevent bleeding. I tried ScotchBlue, and masking tape, and automotive masking tape and it didnt matter, because of the texture in the faux wood and the ridges in the aluminum the bleeding just kept happening (its ok because we fixed it!)

Instead of using gray primer for the burgundy stripe, we used rose primer. Red is a hard color to paint with, it takes a lot more layers to get full coverage, so using a rose primer helped that quite a bit. This side of the trailer was the test side. Everything was done a day beforehand on it so that I could make sure that 1. I could figure out what I was doing, and 2. that I liked it. We didnt want to have another tile fiasco on our hands.

You can see the texture and miniscule gaps in the picture below.

This is where I took over the painting. You.guys. it was so cool!! WAY easier than I thought it would be. Just a word of warning though. Sometimes you make unintentional messes and you get automotive paint on your hands…and it doesnt come off for 2 weeks. SO just wear gloves if you go this route. Alrighty?

In the picture below you can see the storm that came rolling in and put the painting out of commission for a few days, and if you look closely you can see the bleeding. To touch it up we used lacquer thinner and Q-tips and just sort of wiped it off. It worked best if we did it pretty soon after the painting, before it had a chance to cure.

Round 3 was the light pink. Again, lots and lots of taping and masking.

My awesome sister Amy got assigned the job of touchup.

Also, won’t you be my neighbor?

Lets talk about the tires. Court scrubbed all of the rust off of the old wheels and I sprayed them with white automotive. We replaced the actual tires and both of the bearings because I wanted to make sure that it was safe. We found the moon caps here and they were EXACTLY what I was picturing. In the pic above it looks a little wonkfest because it was just leaning against the hub.

It was at this point that we left for Pinner’s Conference in Salt Lake (about 4 hours away) while we were there Jamie my AMAZING assistant started the final round of paint, goldish copper metallic pinstripes on all of the diamonds.

How to Paint Your Trailer - How to Remove Loose and ...

Restoring Faded Paint by Hand on a Vintage Travel Trailer