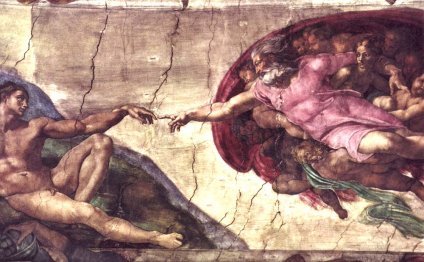 Early Renaissance music (1400 – 1467) gradually dropped the late Medieval period's complex devices of isorhythm and extreme syncopation, resulting in a more flowing style. What the music "lost" in rhythmic complexity, it gained in rhythmic vitality, as a "drive to the cadence" became a prominent feature around mid-century.

In the early 1470s, music starts to be printed using a printing press. Music printing had a major effect on how music spread for not only did a printed piece of music reach a larger audience than any manuscript ever could, it did it far cheaper as well. Also during this century, a tradition of famous makers began for many instruments. These makers were masters of their craft. An example is Neuschel for his trumpets.

Towards the end of the 15th century, polyphonic sacred music had once again become more complex, in a manner that can perhaps be seen as correlating to the stunning detail in the painting at the time.

In Venice, from about 1534 until around 1600, an impressive poly-choral style developed, which gave Europe some of the grandest, most sonorous music composed up until that time, with multiple choirs of singers, brass and strings in different spatial locations in the Basilica San Marco di Venezia (St. Mark's Basilica). These multiple revolutions spread over Europe in the next several decades, beginning in Germany and then moving to Spain, France and England somewhat later, marking the beginning of what we now know as the Baroque musical era.

The Roman School was a group of composers of predominantly church music in Rome, spanning the late Renaissance and early Baroque eras. Many of the composers had a direct connection to the Vatican and the papal chapel, though they worked at several churches; stylistically they are often contrasted with the Venetian School of composers, a concurrent movement which was much more progressive. By far the most famous composer of the Roman School is Giovanni Pierluigi da Palestrina, whose name has been associated for four hundred years with smooth, clear, polyphonic perfection.

The brief but intense flowering of the musical madrigal in England, mostly from 1588 to 1627, along with the composers who produced them, is known as the English Madrigal School. The English madrigals were a cappella, predominantly light in style, and generally began as either copies or direct translations of Italian models. Most were for three to six voices. Musica reservata is either a style or a performance practice in a cappella vocal music of the latter, mainly in Italy and southern Germany, involving refinement, exclusivity, and intense emotional expression of sung text. In addition, many composers observed a division in their own works between a prima pratica (music in the Renaissance polyphonic style) and a seconda pratica (music in the new style) during the first part of the 17th century.

Many instruments originated during the Renaissance; others were variations of, or improvements upon instruments that had existed previously. Some have survived to the present day; others have disappeared, only to be recreated in order to perform music of the period on authentic instruments...