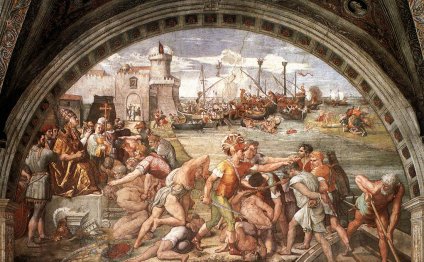 We all know what the Renaissance was, correct? Michelangelo, Leonardo, Raphael and company created some fabulous paintings and sculptures that we continue to marvel over many centuries later and so on and so forth. (Hope you are nodding your head right now and thinking "Yes, yes - please get on with it!") While these were vitally important artists, and their collective work is what usually comes to mind when one hears the word "Renaissance", as so often happens in life things aren't quite that simple.

The Renaissance (a word which literally means "born anew") is a name we've given to a period in Western history during which the arts - so important in Classic cultures - were revived. The arts had quite a difficult time remaining important during the Middle Ages, given all of the territorial struggles that were occurring throughout Europe. People living then had enough to do merely figuring out how to stay in the good graces of whomever was ruling them, while the rulers were preoccupied with maintaining or expanding control.

With the large exception of the Roman Catholic Church, no one had much time or thought left over to devote toward the luxury of art.

It will come as no surprise, then, to hear that "the Renaissance" had no clear-cut beginning date, started first in those areas which had the highest relative levels of political stability and spread, not like wildfire, but in a series of different phases which occurred between the years c. 1150 and c. 1600.

What were the different phases of the Renaissance?

In the interest of time, let's break this topic down into four broad categories.

The Pre- (or "Proto"-) Renaissance began in a northern enclave of present-day Italy sometime around 1150 or so. It didn't, at least initially, represent a wild divergence from any other Medieval art. What made the Proto-Renaissance important was that the area in which it began was stable enough to allow explorations in art to develop.

Fifteenth-century Italian Art, often (and not incorrectly) referred to as the "Early Renaissance", generally means artistic goings-on in the Republic of Florence between the years 1417 and 1494. (This doesn't mean nothing happened prior to 1417, by the way. The Proto-Renaissance explorations had spread to include artists throughout northern Italy.) Florence was the spot, for a number of factors, that the Renaissance period really caught hold and stuck.

Sixteenth-century Italian Art is a category which contains three separate topics. What we now call the "High Renaissance" was a relatively brief period which lasted from roughly 1495 to 1527. (This is the little window of time referred to when one speaks of Leonardo, Michelangelo and Raphael.) The "Late Renaissance" took place between 1527 and 1600 (again, this is a rough time table) and included the artistic school known as Mannerism. Additionally, The Renaissance thrived in Venice, an area so unique (and supremely disinterested with Mannerism) that an artistic "school" has been named in its honor.

The Renaissance in Northern Europe struggled to come into being, mostly due to the stranglehold Gothic art maintained for centuries and the fact that this geographical region was slower to gain political stability than was northern Italy. Nonetheless, the Renaissance did occur here, beginning around the middle of the fourteenth century and lasting until the Baroque movement (c. 1600).

Now let's explore these "Renaissances" to get an idea of which artists did what (and why we still care), as well as learning the new techniques, mediums and terms that came from each. You can follow any of the hyperlinked words (they're blue and have underlining) in this article to go to the part of the Renaissance that interests you most.

Art of the Renaissance Period 2