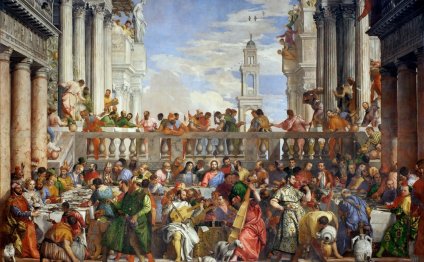 Oil painting was among the main relevant advances in art made during the Renaissance. This new medium is documented already in the 11th century, but were the Northern Renaissance painters, among which Jan van Eyck, that at the beginning of the fifteenth century made wide use of it and spread its use in Europe.

Jan Van Eyck’s work represented the way to build paintings in the classical manner. He painted using a medium and oil colors made from scratch. The medium’s ingredients were subject to the painting stage. The medium consisted of oil, solvent, and varnish measured in specific proportions. In a strict process, he changed medium mixtures with the paint according to the rule fat over lean. Lean is a mixture of 50% oil paint 50% solvent. As he built layers, the mixture changed to a higher fat consistency by adding varnish and oil to the paint. The fat over lean process prevented cracking as the painting dried over time.

In the 15th century, egg began to be replaced by walnut or linseed oil as media. These dried more slowly than tempera and created a paint that was more versatile. The use of oils and canvas supports permitted paintings to be used for a wider variety of situations, and subject matter broadened accordingly. In addition, a greater understanding of perspective and depth in the picture-plane stimulated a need for greater realism. As it was, the natural luminosity and plasticity of oil colors enabled Renaissance artists to achieve wholly new effects of color and realism, and significantly enhanced the power of their color palettes.

Following a tradition begun in Stone Age cave painting, Italian Renaissance artists employed natural chalks made from mineral pigments for drawing. Excavated from the earth, then shaped into sticks with knives, these chalks were instantly ready for use. Red chalks, with their rich, warm hue, were very popular from about 1500 to 1900, as exemplified in works by famous Old Masters like da Vinci, Michelangelo, and Raphael.

Although painting techniques improved immeasurably during the Renaissance, the Renaissance palette mirrored that of the Medieval Age but for three pigments: Naples yellow, smalt and carmine lake (cochineal). Other reds were vermilion and madder lake, which brought to Europe by crusaders in the 12th century.

The Renaissance color palette also featured realgar and among the blues azurite, ultramarine and indigo. The greens were verdigris, green earth and malachite; the yellows were Naples yellow, orpiment, and lead-tin yellow. Renaissance browns were obtained from umber. Whites were lead white, gypsum and lime white, and blacks were carbon black and bone black.

While his work is now categorized as Late Gothic (as opposed to the Early Renaissance work produced south of the Alps, especially in Italy), technically Hieronymus Bosch painted in a style known as alla prima, a painting technique in which pigments are laid on in one application with little or no underpainting.

Tintoretto was probably the last great painter of the Italian Renaissance and one of the greatest painters of the Venetian School. His dramatic use of perspective space and special lighting effects made him a precursor of Baroque art.

In the Miracle of the Slave, the Venetian painter Tintoretto (the son of a master dyer) used carmine pigment in order to achieve dramatic color effects. The painting forms one of the chief glories of the Venetian Academy and represents the legend of a Christian slave or captive who was to be tortured as punishment for acts of devotion to the evangelist, but was saved by the miraculous intervention of the latter, who shattered the bone-breaking and blinding implements about to be applied.

Caravaggio "put the oscuro (shadows) into chiaroscuro” Chiaroscuro was practiced long before he came on the scene, but it was Caravaggio who made the technique definitive, darkening the shadows and transfixing the subject in a blinding shaft of light. He achieved this effect with a limited palette: ochre (red, yellow, umber), a few mineral pigments (vermilion, lead tin yellow, lead white), organic carbon black, and copper resinate. Earths and ochre predominated, and brighter colors were always veiled.

Dutch vermilion, produced by the direct combination of mercury and sulfur with heat followed by sublimation, was highly developed in the time of Rembrandt. He typically preferred to use bright red ochre heightened by the addition of red lake rather than vermilion, which he used only occasionally.

The lake pigments (produced from textile dyes fixed to a precipitate formed with alum and potash or to a chalk substrate) typically used in oil painting to produce effects of richness and depth over opaque underlayers, were rarely used for this purpose by Rembrandt, who typically mixed lakes directly with other pigments to enrich their color.

Ochre’s stability, range of color, and range of translucency to opacity suited Rembrandt’s purposes well and therefore tended to predominate in most of his paintings. In addition to iron oxide, umber contains black manganese dioxide that has a siccative effect on linseed oil. Therefore, they were added by Rembrandt to the ground layers to promote faster drying.