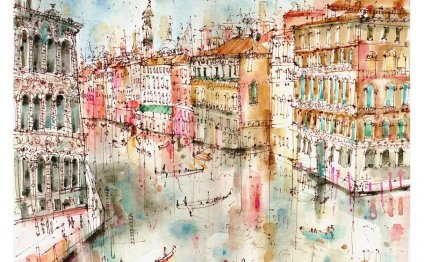 A 2005 sketchbook, with the beginnings of a double-page watercolour of the beach at Denman Island, BC

My travel paintbox colours (14 of them): cerulean blue, manganese blue, ultramarine light, Payne's grey, cadmium yellow (a little blob of it), cadmium yellow deep, yellow ochre, olive green, viridian, burnt sienna, burnt umber, sepia and Indian red + rose madder sharing a single tub. When I moved to Australia in 2006, I replaced the manganese blue with cobalt blue but soon went back to the manganese to get a brighter sky colour.

This little paintbox and the single brush is actually a real nuisance, requiring a looser, wet-into-wet technique than I perhaps might otherwise use; the resulting pictures reflect the truism that watercolour is the interplay of water and chance. With a lot of them now (2013), I block in background colours and shadows and finish them at home with a bigger paintbox (same colours) and sable brushes where I can control the wetness of the paper and get some texture into brushstrokes.

During July, 2003, I travelled to Percé in the Gaspésie, at the extreme eastern end of Québec on the Gulf of St. Lawrence, to give a seminar on travel painting in watercolours and creating sketchbooks (carnets de voyage et aquarelles) for the Université Laval's International Summer School. The page on Percé has the results and on a linked page the sketches from 2004 and 2005. In 2006 and 2007 I gave the same course at the Island Mountain Arts Centre in Wells, BC. I formalized the course for 2011 in Percé and at Susan Gorris's Art in the Country in Langley, BC, as "The Grammar of Space, " spending a lot more time on the structure of pictorial space and different ways of representing it.

Around 2004, largely due to the difficulties of painting in European cities, I modified my technique and began to use small annotated pencil sketches as the on-site "plein air" image, then painted as soon as possible after that – often...

Have gun will travel: painting a modern military contractor

Vintage Travel Trailers -Painting and Restoration of the ...