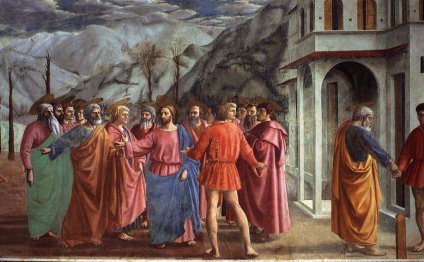 The High Renaissance in Italy is generally described as the period from around 1500, although like the starting date of the Renaissance itself the dates are not set in stone.

Work from ancient Greek and Roman sculptures and buildings had been admired and studied by generations of artists and the explosion in art and creativity reached its pinical in quite a narrow timescale, up to about 1530. During this period the classical arts of antiquity had been fully recaptured and the accumulation of knowledge that started with Giotto was fully expressed in the work of the Great masters.

For many the end of the fifteenth century and the beginning of the sixteenth, the cinquecento, was viewed with relief. The greatly feared end of the world, thought by many to coincide with the end of the century (1500) had not happened. The painters of this new century reflected the new sense of optimism felt by many. They were also aware of the debt they owed to those pioneering artists that had gone before, standing on the shoulders of previous generations of great artist’s and building on that accumulated knowledge became the ambition. Oil paint was now the medium of choice, perspective had been mastered as had the skills of facial expression and depth of colour.

High Renaissance artists were very often skilled in many fields, Leonardo da Vinci was of course a master of many differing sciences and Michelangelo was a gifted poet, painter and sculptor. The third member of the trilogy of artists, who are often viewed as ultimate examples of high renaissance art, Raphael, was an architect and extraordinarily gifted painter.

Some of the period’s greatest works are Michelangelo’s Sistine Chapel frescoes, Raphael’s paintings in the Vatican stanze and the northern Italian artist Correggio’s decoration of the dome of Parma Cathedral. After the sack of Rome in 1527 by German mercenary troops, and the death of Raphael in 1520, Pope Paul III Farnese oversaw possibly the final great High Renaissance work executed in Rome, Michelangelo's Last Judgement in the Sistine Chapel.

The Laocoon group is a first century Roman sculpture copied from a Greek original dating from the second century B.C. Laocoon was a Trojan priest who was punished by the gods when they sent two serpents to suffocate him and his two sons to death.

Michelangelo admired this work very much and it's clear to see why the artists of the Renaissance looked to the art of antiquity for inspiration. I have seen this statue in the grounds of the Vatican and in my opinion it is as fine a work as any Renaissance sculpture.

The High Renaissance in Venice.

By 1500 Venice was the centre of the seaborne trade that fuelled the cultural developments of North East Italy. The city was one of the wealthiest in world, the equal of its southern neighbour Florence, it was a political as well as a commercial centre.

The High renaissance in Venice began with Giorgione and produced a string of important and gifted artists. Both Giorgione and Titian had studied in the workshop of the Bellini family unfortunately Giorgione’s life was short (c.1478-1510) by contrast Titian lived to be nearly 100. He produced a huge volume of work which included completing some parts of Giorgione’s paintings making attributions between the two artists work difficult.

Titian’s altarpieces in the Venetian church of the Frari are a must see for any visitor to the city, his fame was almost the equal of Michelangelo and he is the superstar of Venetian painting.

Two younger painters, Jacopo Tintoretto and Paolo Veronese, created some monumental paintings although their styles differed. Many of Tintoretto’s paintings contain sharp contrasts between light and shadow and his work is often quite sketchy, his decoration of the Scuola di San Rocco crackles with dynamism and power. Veronese’s Feast in the House of Levi, along with his Marriage Feast at Cana are among the greatest works of the late Venetian renaissance

The Bridge of Sighs, Venice. (P)

The Renaissance in Italy laid the foundation for the development of western art. The many iconic works in both painting and sculpture influenced successive generations of artists, an influence that continues to the present day. The early Renaissance years had belonged to the city of Florence but the High Renaissance in Italy is centred on the two city's of Rome and Venice. Eventually the Renaissance style was adapted by later painters and evolved into the style known as Mannerism.

Italian Renaissance Art Analysis - The Delivery of the Keys