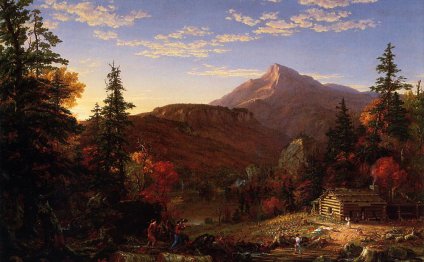 The artist George Inness pursued similar themes in his work. As with other Hudson River School artists, nature predominates in many of his paintings. A good example is "Peace and Plenty" (1865), with its sublime background and is more pastoral foreground. But in "Lackawanna Valley" (1855), depicted here, Inness seems more ambivalent. The foreground is dominated by tree stumps and a young man gazing down into the valley. One or two trees in this part of the painting remain standing. In the top half of the painting is the bustling town of Scranton, Pennsylvania, and the complex of the Delaware, Lackawanna, and Western Railroad Company, the business enterprise that commissioned this particular work. The distant mountains seem to be shrouded in a smoky haze that will be quite familiar to anyone who has spent time in this part of the country (and for the same reasons-whether you realize it or not, much of the haze we see around here is due to air pollution!). In between are some remants of wild nature, which seem increasingly in danger as the town expands in the valley and land is cleared for agriculture in the countryside. Inness may be saying he prefers the human touch on the landscape. He may also be warning how modern industrial society threatens wild lands. Either reading seems plausible.

The HRS artist Jasper Cropsey also seems ambivalent about progress. In some of his paintings, like "Catskill Mountain House" (1855), the natural world and the sublime clearly predominante. But even here, in the very center of the painting, there is a human habitation, the hotel where urban New Yorkers came to temporarily escape into the wilds of the Catskill Mountains to be renewed and invigorated by the sublime scenery.

Cropsey's "Starrucca Viaduct" (1865), on the right, is a view of the most famous bridge on the route of the New York and Erie Railroad, a stucture that was once touted at the Eighth Wonder of the World. The bridge was gigantic-some 1, 200 feet long and 114 high-and made of hewn stone. It convincingly demonstrated how railroads might safely overcome natural obstacles, like mountainsides and rivers. Yet this collosal human structure seems dwarfed by the wilderness it cuts through. Sublime mountains and threatening skies predominate in the top half of the picture, while a quiet body of water and beautifully colored foliage occupy the foreground. From a quick glance of the picture it is easy to miss its ostensible subject-the railroad bridge-almost entirely. Notice also the way the railroad is moving from the right side of the painting to the left. This is analogous to moving from east to west on most maps, and many HRS paintings including some suggestion of this kind of westward movement.

Several HRS painters began specializing in scenes of the American West. They are sometimes talked about as a separate "Rocky Mountain School, " but many of the themes they explore and the approaches to landscape painting they pursue are quite similar to other HRS artists. One of this period's best-known artists who specialized in western scenes was Albert Bierstadt, who was born in Germany but raised in Massachusetts. He received formal training at the Dusseldorf Academy back in his native Germany, and then, like Church and Cole, established a studio along the Hudson River. He traveled repeatedly to the West to paint. His "Rocky Mountains, Lander's Peak" (1863) is a marvelous example of his work. Dramatic mountains and sweeping cloud formations form the backdrop for the work. Through a careful use of light and shadow, the artists draws the viewer into the center of the painting, which depicts a sublime waterfall. And the foreground includes a pastoral scene, but in this case it's of a native American encampment, complete with teepees, herds of horses, and tribal members milling about. Paintings like this one brought realistic (though carefully chosen) views of the American West to eastern viewers at a time when long distance travel was difficult, expensive, and uncertain. This particular painting was quite large (ca. 6 feet by 10 feet) and quite popular. It sold for $25, 000, the most anyone had paid for an American painting up to that point.

One of Bierstadt's favorite places to depict was Yosemite. His "Domes of the Yosemite" (1863) played a role in convincing Congress to give the Yosemite Valley to the State of California to be set aside as a park "for public use, resort, and recreation" (See Nash, pp. 106-07). Later (in 1890) Congress would establish the second national park in Yosemite. As we shall we later in the course, at the turn of the century site became the center of a controversy when the city of San Francisco tried to build a dam inside the boundaries of the Yosemite National Park. Notice how various manifestations of the sublime predominate in the painting. You should also realize that this painting is huge, 10 feet by 15 feet. "Looking of the Yosemite Valley" (ca. 1865-67) is a later version of this same general area. Notice here the dramtic rock outcroppings, the sun bursting forth through the clouds, and the waterfall, all suggestions of the sublime. As in many paintings, there are also a few humans in the foreground to give the viewer more of a sense of the immense scale of the background. A final example from this series, "Yosemite Valley" (1868) is also a really gorgeous image and explores similar themes.