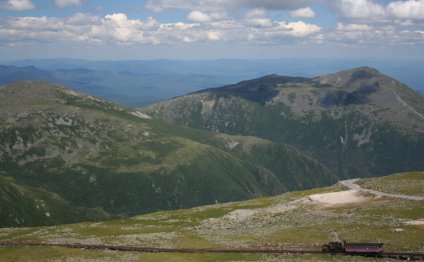 The Hudson River School:
Nationalism, Romanticism, and the Celebration of the American Landscape

Please note: Images of many of the paintings discussed in this presentation are embedded in the text below. In many cases, larger images of those paintings are available by clicking on the painting. Paintings discussed in the text but not reproduced below can be accessed by clicking on the image title (found in blue). Use your browser's back button to return back to this page. Also, you should note that this presentation is in two parts, with a link to the second part found at the bottom of this page. Enjoy!

The Hudson River School (HRS) was a group of American landscape painters who were active from about 1825 to about 1880. Their work was characterized by an interest in realistic depictions of nature and a burning desire to celebrate distinctly American scenery. Until the emergence of the HRS, most American artists seemed more interested in doing portraits than painting landscapes. The few American artists who did landscapes generally looked to Europe for guidance on subject matter and technique. Greek and Roman ruins, Norman castles, and other similar subjects from the other side of the Atlantic were more likely to appear on their canvases than American scenes. In addition, much of the landscape painting done prior to the emergence of the HRS was allegorical and therefore not necessarily intended to represent a real place.

The HRS is well worth examining in some detail because it combines elements of Romanticism (talked about in Nash, chapter 3) and nationalism (discussed in Nash, chapter 4). The first Europeans who came to the New World tended to view nature either as an evil, forbidding wasteland (Nash, chapters 1 and 2) or as a storehouse of economically valuable resources (Steinberg). In either case, wilderness was something to be quickly civilized, brought under human control in the name of progress. In associating nature with divinity, valuing the sublime, and exalting a life close to nature, the Romantics provided an alternative framework through which to see and appreciate the natural world.

After the American Revolution, and especially after the War of 1812, nationalism provided another ground for appreciating nature. The basic argument ran something like this. America might not possess the cultural heritage of Europe-it lacked, for example, the Parthenon, Gothic Cathedrals, the Mona Lisa, and Shakespeare. But America did still have something that Europe no longer possessed-an abundance of majestic wilderness, where sublime encounters with the divine might still take place. Under the influence of Romanticism and nationalism, wilderness was something the young nation could point to with pride, something uniquely its own. This nationalistic pride in American wilderness first developed among a largely urban, educated cultural elite in the late eighteenth century, and during the nineteenth century it gradually diffused to the wider culture. Remnants of these ideas remain with us to this day.

It was within these cross-currents of Romanticism and nationalism that the Hudson River School burst onto the American cultural scene. In 1835 Thomas Cole, the founder of the Hudson River School whose photograph is featured on the left, wrote an "Essay on American Scenery" that nicely captures this sense that New World wilderness might serve as a source of nationalistic pride:

Though American scenery is destitute of many of those circumstances that give value to the European, still its has features, even glorious ones, unknown to Europe. . .the most distinctive and perhaps the most impressive, characteristic of American scenery is its wildness. . . . [I]n civilized Europe the primitive features have long since been destroyed or modified. . .And to this cultivated state our western world is fast approaching; but nature is still predominant, and there are those who regret that with the improvements of cultivation the sublimity of the wilderness should pass away; for those scenes of solitude from which the hand of nature has never been lifted, affect the mind with a more deep toned emotion than that which the hand of man has touched. Amid them the consequent associations are of God the creator-they are his undefiled works, and the mind is cast into the contemplation of eternal things.

The HRS gained its name from the fact that many of the early paintings from this school were of the region surrounding the Hudson River, whose commercial importance as a link between New York City and the Great Lakes greatly increased with the opening of the Erie Canal in 1825. Later followers of this school began depicting more far flung locations, including New England, the American West, South America, and others. Many HRS artists also maintained homes and studios along the Hudson River. The other element that unites many of the HRS images is a strong element of the sublime-waterfalls, mountains, volcanoes, thunderstorms, dramatic sunsets, and other suggestions of immense power loom large in many of these paintings. As Nash explains, the sublime provoked a combination of feelings-awe, amazement, fear, and terror-that Romantics found particularly attractive. For many the sublime also suggested divinity and spirituality.