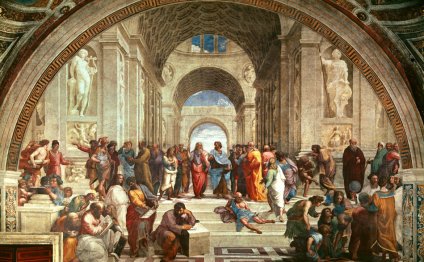 Sound and color may seem, at least superficially, to have very little in common. But as Athens-based artist and physicist Yiannis Kranidiotis points out in his audiovisual project, Ichographs MdelP, in which colors from Rafael’s Madonna del Prato ("Madonna of the Meadow") decompose into audio, both sounds and colors can be described as waves.

“There are areas of sound and color (light) that humans can perceive with their eyes and ears (hearing and visible range) and areas where we need special equipment (like infrasound—ultrasound and infrared—ultraviolet ranges), ” Kranidiotis tells The Creators Project. “As a physicist, I was always fascinated by these common properties and I was investigating ways to highlight and juxtapose them.”

As the virtual camera moves around particles floating in a white aether, the viewer hears the sound of the colors/frequency generator particles flying toward the canvas to assemble the painting. Warm colors like red are higher frequencies, and cold colors like blue are lower frequencies.

Kranidiotis created Ichographs MdelP—part of the Ichographs series of artworks, where colors and therefore image can transformed into sound—in C++ using openFrameworks for the visuals and then Pure Data for the audio.

All of the sound data (frequency amplitudes) were sent from the openFrameworks software via OSC to a Pure Data patch with a set of 600 sine wave generators for producing the sound. Kranidiotis created the visuals using After Effects.

“The loudness of each particle is proportional to the distance from viewer, ” Kranidiotis explains. “As a result, when we pass over the red clothes of Madonna, we hear the high 'red' frequencies and when we approach the blue sky we hear the low 'blue' frequencies.”

The Renaissance Portrait from Donatello to Bellini

Famous paintings from the Renaissance

Painting in Renaissance art continued to progress in art history from the Gothic period, toward more realism and three dimensions…