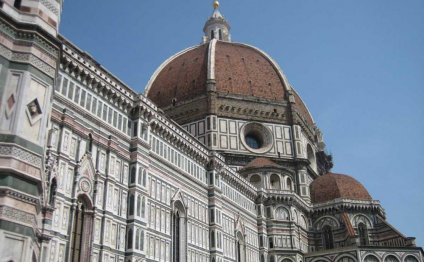 The oldest extant large scale Floretine pictorial project is the mosaic decoration of the interior of the dome of the Baptistery of St John, which began around 1225. Although Venentian artists were involved in the project, the Tuscan artists created expressive, lively scenes, showing emotional content unlike the prevailing Byzantine tradition. Coppo di Marcovaldo is said to have been responsible for the central figure of Christ and is the earliest Floretine artist involved in the project. Like the panels of the Virgin and Child painted for the Servite churches in Siena and Orvieto, sometimes attributed to Coppo, the Christ figure has a sense of volume.

Similar works were commissioned for the Florentine churches of Santa Maria Novella, Santa Trinita and Ognissanti in the late 13th century and early 14th century. Duccio's panel of around 1285, Madonna with Child enthroned and six Angels or, for the Santa Maria Novella, now in the Ufizi Gallery, shows a development of the naturalistic space and form, and may not have been originally intended as altarpieces. Panels of the Virgin were used at top of rood screens, as at the Basilica of San Francesco d'Assisi, which has the panel in the fresco of the Verification of the Stigmata in the Life of Saint Francis cycle. Cimabue's Madonna of Santa Trinita and Duccio's Rucellai Madonna do, however, retain the earlier stylism of showing light on drapery as a network of lines.

The Difference Between Art Styles, Schools and Movements

Behind The Scene of Art of Music

Their goal is to become a real hub in the community for artists, musicians, and music and art appreciators to come together…