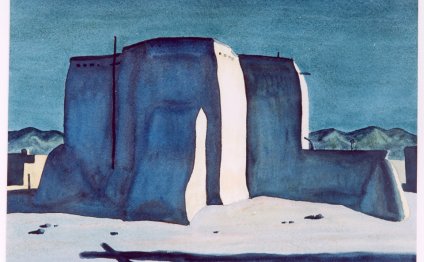 The artist Joseph H. Sharp first visited Taos while on a sketching trip in 1883, and was captivated with its enchanting atmosphere. He is often referred to as the artist who "started it all." Later, while studying in Paris, he shared his enthusiasm with two artist friends, Bert G. Phillips and Ernest L. Blumenschein. As a result of a broken wagon wheel on September 3, 1898, the two artists stayed in the Taos area instead of completing their scheduled trip to Mexico.

Back in Paris, Blumenschein met E.I. Couse and told him of a mystical mountainous region. This inspired Couse to also explore Taos. Oscar E. Berninghaus joined the Taos artists and with the addition of Herbert Dunton, a painter of cowboys and ranch life, the "Founding" group numbered six. On July 1, 1915 the first meeting of the Taos Society of Artist was held. The proposed purpose of the association was to promote the showing and sale of their work.

These members of the Taos Society of Artists (and others) found the Taos area an inspiring place to paint. Maybe it was the altitude and wide-open spaces of the high desert region with its shapes of everything from the sage-dotted plains to the vast peaks of the many mountains with their forests of pines, aspens, cottonwoods, wild flowers, and wildlife to the earth colored adobes that characterize the Taos style. Or, maybe it was the piercingly blue and startlingly clear Taos sky with the magnificent sunsets that drape the Rio Grande Gorge with splendid gigantic clouds of ember reds, glowing oranges, vivid violet, deep pale blues, and a vast array of silver and gray colors.

Following the arrival of this initial group of artists, the Taos are has grown to become a renowned international art market and artists' community. It is presently estimated that there are more artists, per capita, in the Taos area then in any other city in the world, including Paris, France.