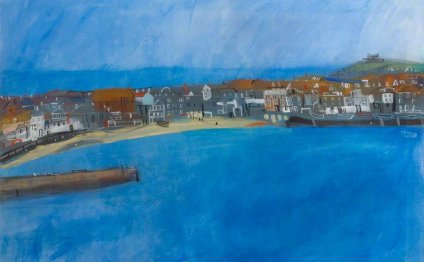 During the 1950s, a group of painters gathered around the Cornish harbour town of St Ives, among which were some of the leading modern artists of their time. They represented Britain's contribution to an international search for an art that respected modernism's abstract values and was suited to the postwar, post-Holocaust world. Alan Davie, Terry Frost, Patrick Heron, Roger Hilton, Peter Lanyon, William Scott and Bryan Wynter explored the sensitive zone between representation and abstraction: testing the expressive potential of the material of paint itself, and of the mark and gesture, while retaining semblances of subject matter, external references or imagery. Similar explorations and experiments were being conducted elsewhere by a host of artists including Jackson Pollock and Mark Rothko in the US, Jean Dubuffet in France and Alberto Burri in Italy. This important British contribution has largely been written out of the histories. Even in Britain it has too often been considered in parochial terms.

Accounts of the artists of St Ives not only tend to focus on their use of landscape and nature as a source, but to present it as a kind of unwitting inevitability due to their location. A new exhibition, however, sets out to view the art of St Ives from the other end of the telescope; to position it not in relation to where it was made but to what was made, how it was made and to its relationship with art made elsewhere in the same era.

The repeated association of the "art of St Ives" with the town itself was most famously seen in the Tate gallery's great 1985 survey. The exhibition's catalogue included a personal memoir by the architect David Lewis, a member of the St Ives artistic community, which begins and ends with landscape: "So the landscape was the common factor for all of us, a presence of perpetual power which in its transitoriness reminds us of our own … any pathway we followed, over moors, or down the shafts of mines, or along the corridors of gales, led only to oneself."

While Lewis highlighted the ways in which artists found in landscape a symbol for that which they wished to express in their work, the rest of the catalogue emphasised local events rather than offering a broader perspective or context. Such localism has been a dominant and debilitating aspect of accounts of the art of St Ives from the 1950s to the present. The first book dedicated to the subject was Denys Val Baker's (1959). Its cover sports a photograph of Peter Lanyon looking across the harbour with a palette and brushes in his hand as if poised to paint the picturesque scene, even though he was by then a successful abstract painter. The book's blurb typifies most writing on St Ives art: "This is not a book of art criticism. It is a book about St Ives and the surrounding districts of West Cornwall and the art colony that has developed there."

In contrast, the leading art historian and critic Charles Harrison proposed that one should not assume that the place of St Ives necessarily played a determining role in the art that was made there. Artistic developments, he suggested, might equally have been determined by external factors that could help explain the visual parallels between work such as Lanyon's Thermal and that of artists such as Willem de Kooning. The new exhibition takes up Harrison's call for a non-localised appraisal of St Ives. It presents the works of the major St Ives artists in conjunction with those by contemporaries who engaged with common technical and ethical issues.

Harrison argued that the key technical issue for the artists was the reformulation of painting and pictorial space in the wake of cubism. Others might explain it in terms of the crisis of modern art following the rise of fascism and the erosion of the optimism of prewar movements. As the critic Lawrence Alloway wrote, the postwar generation of artists "could neither start again, nor stay as it was, as if nothing had happened"; it was a generation "torn by conflicts of prewar formality and postwar directness".

For Harrison, St Ives had provided a safe haven where the values of international modernism might be protected: "Under the cultural conditions that prevailed not simply in England but in Europe during the war and its aftermath – conditions characterised by themes of patriotism, nationalism, xenophobia, insularity and by that peculiar fascinated angst which was expressed in Graham Sutherland's work and then in Francis Bacon's – an unadulterated modernist culture could only continue in rustication."

In that way, the critic set the art of St Ives apart from the neoromanticism of Henry Moore and Sutherland that had become the dominant form of modern art in 1940s Britain, and aligned it with the high modernism of Theo van Doesburg and Piet Mondrian. Certainly, a defining characteristic of postwar St Ives art is that it had a direct link to the utopian ideals of the international modern movement of the 1930s. The whole St Ives phenomenon had been started by the migration there, at the beginning of the war, of Hepworth, Ben Nicholson and Naum Gabo. Gabo's sculpture Spiral Theme influenced a number of painters and the presence of these veterans of the prewar international modern movement shaped the thinking of the artists of 1950s St Ives. With them came the culture of Circle, the 1937 publication that surveyed the international constructivist movement in painting, sculpture and architecture, from the suprematism of Kazimir Malevich in pre-revolutionary Russia to its own moment when, in the age of fascism, London became briefly the capital of abstract art.

The Realisation of a Dream When the St Ives School of Painting opened in April 1938, it was the fulfilment of a vow made…