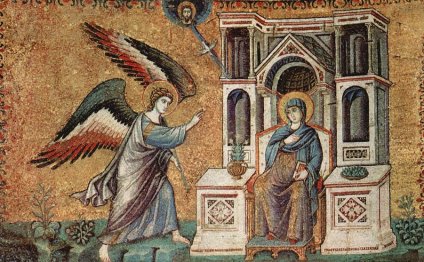 The suggested timeframe of 1200–1400 roughly stems from the Italo-Byzantine period in the Late Medieval period to the cusp of the Renaissance. The material included focuses exclusively on Italy, centered on artistic developments in the rivaling schools of painting in the city-states of Florence and Siena. The term Proto-Renaissance implies that this period is a precursor or foundational to what is considered the main time period of the Italian Renaissance that spanned roughly between 1400–1600.

In an hour and fifteen minutes, you should be able to cover the following:

Altarpiece: a panel that is painted or sculpted representing a religious subject that is placed above and behind an altar in a church. Two panels = diptych; three panels = triptych; multiple panels = polyptych.

Chiaroscuro: literally translated as “light-dark.” The use of light and dark to produce three-dimensional modeling.

Foreshortening: the use of perspective to show the extension of an object back into space.

Giornata (pl. giornate): meaning “day” in Italian, the section of plaster that a fresco painter expects to complete in one session, to keep the plaster from drying before pigment can be added.

Italo-Byzantine Style (the maniera greca) : the use of the Byzantine style in Italy, especially prevalent after the fall of Constantinople in 1204, which led to the migration of Byzantine artists to Italy.

Maestà: the scene of the Virgin Mary (Madonna) seated on a throne holding the infant Jesus in her lap, often flanked by angels, saints or prophets. Literally translated, “majesty.”

Tempera: a paint made of pigment mixed with egg yolk, glue or casein.

Much of the remaining art we have from the Middle Ages is in the form of altarpieces or parts of altarpieces that decorated the apse of churches where the main services were performed. Altarpieces would also be found in the chapels in the apses around the church. We now mainly see famous altarpieces in museums, and often that does not allow us to see how they would have functioned. In addition, many panels in museums were part of much larger altarpieces, and are so decontextualized, and were often painted on the back, something not all museum displays allow you to see. (For more on altarpieces, see:).

The predominance of altarpieces as primary artistic products of the Medieval period began in the thirteenth century, when the ritual of the Mass was moved in front of the altar. The priest would stand with his back to the congregation—leaving the altar table open for large-scale religious imagery. The increasing number of altarpieces resulted from the growth of the cities in Western Europe. At the same time there was a growth of the institutionalized church in cities, as well as an increasingly wealthy patrons of the arts, who often commissioned altarpieces for private chapels (Hartt 32–3). The typical materials used to create altarpieces throughout the Italian Renaissance were tempera paint on wood panel with gold leaf, until the introduction of oil paints from the Netherlands in the mid- to late fifteenth century.

Bonaventura Berlinghieri’s Saint Francis Altarpiece (tempera on wood with gold leaf, 5’ x 3’ x 6’, c. 1235) exemplifies the Italo-Byzantine style, also known as the maniera greca or the Greek style, which dominated the art of the late Medieval Period in Italy. Until the late eleventh century, southern Italy occupied the western border of the vast Byzantine Empire. Even after this area fell under Norman rule in about 1071, Italy maintained a strong link with Byzantium through trade. In this style of art then, we can see the links between the two cultures. In this example, the central subject of St. Francis is identified by his clothing (typical of the Franciscan monastic order he has a clerical robe tied at the waist with a rope), as well as by the marks on his hands and feet that indicate his receiving of the stigmata (marks corresponding to the wounds of Jesus Christ that are associated with his revelations about the passion of Christ, essentially a mark of divine insight or of God’s blessing).

St. Francis is shown in a manner similar to Byzantine icons, which coupled with the marks of the stigmata, express the common belief that St. Francis was a second Christ. The scenes on the side show St. Francis and his miracle cures, further tying him to the healing powers of Christ (Kleiner 405). Byzantine examples such as the Mosaic of Justinian from San Vitale, Ravenna (c. 547) or the Crucifixion from the Church of the Dormition, Daphni, Greece (c. 1090–1100) offer two possible comparisons to discuss the application of the Byzantine style to altarpiece panel painting. Berlinghiero’s Madonna and Child (tempera on wood, gold ground, 31 5/8 x 21 1/8 in, c. 1228–30) is another clear example of the Italo-Byzantine style that can lead to more direct comparisons with Proto-Renaissance altarpieces by Cimabue, Duccio, and Giotto, given that it also shows a Maestà.

It is not until the end of the thirteenth century in Italy that artists began to (re)explore the physical realities of the figure in space. The Florentine artist Cimabue (Cenni di Pepo), the teacher of Giotto di Bondone, is often credited as one of the first artists to move away from the Italo-Byzantine style towards a greater naturalism, a trend exemplified by his Madonna Enthroned with Angels and Prophets (tempera and gold leaf on wood, 12’ 7” x 7’ 4”, c. 1280–90). In this example, there are four prophets who can be seen in the bottom of the painting, identified by the scrolls that they hold. Although there are many similarities to Italo-Byzantine precedents that can be discussed, here Cimabue has developed a new sense of the body as three dimensional, sitting more naturalistically in space.

We live in a world that’s highly technical and specialized. When a man goes to college these days, he spends his time learning…