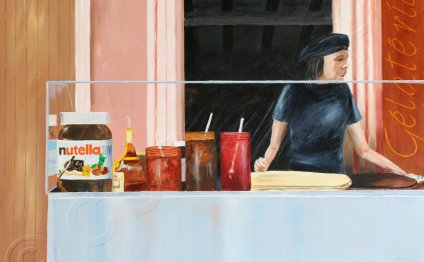 ‘The United States is not an easy market for black-market smuggling of art and antiquities, ’ said the attorney for the Eastern District of New York. Photograph: Xinhua/REX Shutterstock

The US government has formally returned a painting by Pablo Picasso, valued at $15m (£9.6m), which had been stolen more than a decade ago from a Paris museum and seized by immigration officials late last year in New Jersey.

During a ceremony at the French embassy, Sarah Saldaña, director of Immigration and Customs Enforcement (ICE), officially repatriated the abstract artwork, titled La Coiffeuse (The Hairdresser). It was signed over to Frédéric Doré, the Embassy of France’s deputy chief of mission.

“There’s a tremendous feeling of accomplishment when we return a piece of art like this, ” said Saldaña.

Kelly Currie, acting US attorney for the eastern district of New York, said the package aroused suspicion because it was heading for a climate-controlled storage facility — a peculiar destination for a package marked with French words suggesting it contained a $37 Christmas gift. “The US is not an easy market for black-market smuggling of art and antiquities, ” he said.

Currie added that the speed with which government agencies handled the case was unprecedented.

Details surrounding who sent the package and how the painting was stolen weren’t provided and the investigation continues. Currie said no arrests have been made.

Picasso painted La Coiffeuse in 1911. The cubist painting, which is no bigger than a pizza box, sat on a tan easel wrapped in plastic and situated behind a burgundy rope for the duration of the event.

Officials gave no indication when the painting will be returned to the museum and said it had endured minor damages and would have to be restored.

“The message from ICE today is, ‘This is a part of our mission, a part of the work we do’, ” said Saldaña. “You saw some tremendous investigative work in detecting this piece to begin with and we will continue to do so.”

Lots of quiet time for you to paint as you wish, free of distractions & worries, supported with some one-to-one individual…