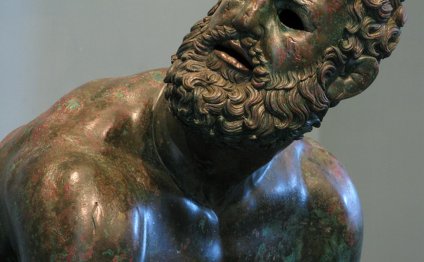 In honor of longtime manuscripts curator Thomas Kren, who retired last fall, the Getty Museum has acquired an illuminated copy of the Book of Deeds of Jacques de Lalaing (c. 1530s). It includes a frontispiece by Simon Bening that (judging from the press images) rivals the best paintings of the Flemish Renaissance. The book’s primary author, Jean Lefèvre de Saint-Remy, is shown in his study. Within this image, about 8 inches high, Bening looks forward to such Netherlandish specialties as portraits, landscapes, still lifes, and genre scenes.

It’s also a menagerie of sorts, with a dog, peacock, dappled horse, and chained pet monkey.

That’s the only Bening, but the Book of Deeds has 17 other miniatures by an artist assigned to the circle of the Master of Charles V. These show the adventures of knight errant Jacques de Lalaing. A famed tournament fighter and favorite of Philip the Good, he became one of the first Europeans to be killed by firearms. Below is a bullet-time miniature of Jacques staring down the cannonball that would kill him at age 33.

Philip was so distraught at the loss of his knight that he ordered everyone in Poeke Castle hanged—sparing only children, priests, and lepers.

Jacques’ dramatic death at a young age secured his legend. His family commissioned the manuscript about 80 years afterward, and it has remained with them for nearly the past 500 years. As far as I can tell, the manuscript has not been exhibited recently (at all?) and is virtually unknown even to the Internet. The only hits for a Google image search were recent tweets announcing that the manuscript will be exhibited at TEFAF Maastricht this March. (The Getty is saying it will have it on view this summer.)

The Simon Bening miniature is a new-to-the-21st-century Renaissance painting with star power, by a major artist in top form and unfaded color. With all due respect to dishwater “Leonardos”, that kind of rediscovery doesn’t happen very often.

Michelangelo documentation - The best painters in the world