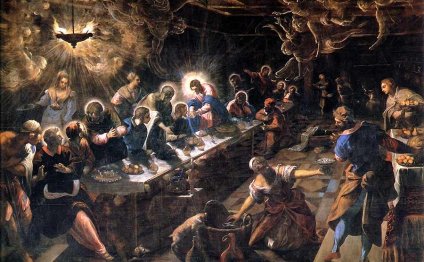 After the High Renaissance in Italy, many wondered just where art was heading next. The answer? Mannerism.

The new style first popped up in Florence and Rome, then the rest of Italy and, eventually, all over Europe. Mannerism, a phrase coined in the 20th-century, is what happened artistically during the "Late" Renaissance (otherwise known as the years between Raphael's death and the beginning of the Baroque phase in 1600). Mannerism also represents Renaissance art going out, as they say, not with a bang but, rather, a (relative) whimper.

The High Renaissance was, of course, astonishing. It represented a peak, a height, a veritable zenith (if you will) of artistic genius that surely must have owed something to a favorable zodiac. In fact, the only downside to the whole business was, with the Big Three Names diminished to one (Michelangelo) after 1520, where was art to go?

It was almost seems as if art itself said "Oh, what the hey. We could never top the High Renaissance, so why bother?" Hence, Mannerism.

It's not fair, though, to completely blame rrt for its loss of momentum after the High Renaissance. There were, as there always are, mitigating factors. For example, Rome was sacked in 1527, taken over by the armies of Charles V. Charles (who had previously just been Charles I, King of Spain) had himself crowned as Holy Roman Emperor and got to control things in most of Europe and the New World. By all accounts, he was not particularly interested in sponsoring art or artists - especially not Italian artists. Neither was he enamored with the idea of the independent city-states of Italy, and most of them lost their independent status.

Additionally, a troublemaker named Martin Luther had been stirring things up in Germany, and the spread of his radical preaching was causing many to question the authority of the Church. The Church, of course, found this absolutely intolerable. Its response to the Reformation was to launch the Counter Reformation, a joyless, restrictive authoritative movement which had a zero tolerance policy toward Renaissance innovations (among many, many other things).

So here was poor art, deprived of most of its genius, patrons and freedom. If Mannerism seems a bit half-posteriored to us now, it was honestly about the best that could be expected under the circumstances.

What are the key characteristics of Mannerism?

Another new development at this time was rudimentary archaeology. The Mannerist artists now had actual works, from antiquity, to study. No longer did they need to use their respective imagination when it came to Classical stylization.

That said, they (the Mannerist artists) almost seemed determined to use their powers for evil. Where High Renaissance art was natural, graceful, balanced and harmonious, the art of Mannerism was quite different. While technically masterful, Mannerist compositions were full of clashing colors, disquieting figures with abnormally elongated limbs, (often torturous-looking) emotion and bizarre themes that combined Classicism, Christianity and mythology.

The nude, which had been rediscovered during the Early Renaissance, was still present during the Late but, heavens - the poses in which it found itself! Leaving compositional instability out of the picture (pun intended), no human could have maintained positions such as those depicted - clothed or otherwise.

Landscapes suffered a similar fate. If the sky in any given scene wasn't a menacing color, it was filled with flying animals, malevolent putti, Grecian columns or some other unnecessary busy-ness. Or all of the above.

Whatever happened to Michelangelo?

Michelangelo, as things turned out, segued nicely into Mannerism. He was flexible, making transitions with his art that dovetailed with the transitions in all of those successive Popes who commissioned his work. Michelangelo had always had a tendency toward the dramatic and emotive in his art, as well as a sort of carelessness toward the human element in his human figures. It probably shouldn't have been surprising, then, to find that restorations of his works in the Sistine Chapel (the ceiling and Last Judgement frescoes) uncovered his use of a rather loud palette of colors.

Last Friday at the National Gallery I was involved in a discussion about the lily s importance in Renaissance Art.She spent…